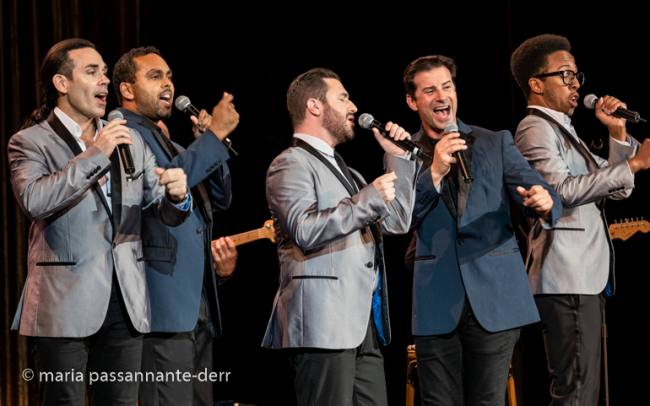 The Doo Wop Project brought the wildly popular,  a cappella,  street harmony of the 50’s to the Paramount Theatre in Asbury Park Friday night. The evening, in part, was a tribute to the authentic Doo Wop sound of the Del Vikings, The Crests, The Temptations and  Frankie Valli, after  which the group  updated their sound with contemporary songs by Michael Jackson and Maroon 5 in a Doo Wop style.  The transition of their  musical style,  during the show, from classic Doo Wop to a contemporary style, was brought about by the  masterful arrangements of member, Santino Paladino (musical director and pianist, whose most recent credit is the successful revival of Smokey Joe’s Cafe).  The group members are all talented and seasoned Broadway performers:  Dwayne Cooper, from Broadway’s “Motown”, who has performed in national tours and film and tv,  engaged the audience with his bass voice and improvised dancing.  Dominic Nolfi, one of the founding members and currently performing in Chazz Palminteri’s , “A Bronx Tale”, is an original member of “Motown” and “Jersey Boys”. Dominic Scaglione, Jr., a  co-founder, portrayed Frank Valli in the Las Vegas, Chicago and New York shows  of “Jersey Boys” and sang at Frankie Valli’s,  New Jersey Hall of Fame induction.   Charl Brown, received a Tony nomination for his  role as Smokey Robinson in Broadway’s, “Motown”. Russell Fischer, who played Joe Pesci and understudied for Frankie Valli, for six years,  in “Jersey Boys”,  is known in the group for  his falsetto and tenor voice. The Doo Wop Project is a collaboration with no one leader. Each  member, throughout the  evening, takes the lead, showcasing their talent. At the end of the show, the audience, enthusiastically brought the group back to the stage for an  encore of The Dells, classic “Oh What a Night” and Oh What a Night it was !
The Doo Wop Project will appear this weekend (June 30th at the Westhampton Beach Performing Arts Center) before they bring their sound to San Diego  (July 5th) and to Beijing, China (July 19th).  Members: Dominic Nolfi;  Dominic Scaglione, Jr.; Charl Brown; Russell Fischer; Dwayne Cooper;  Santino Paladino. 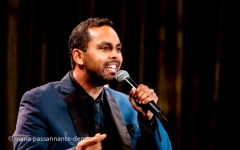 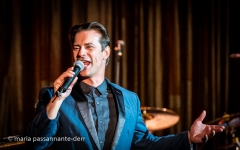 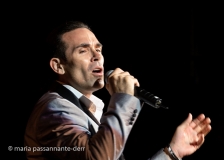 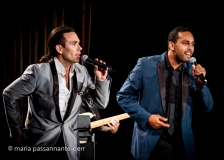 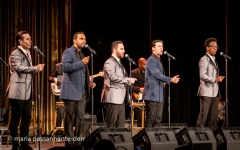 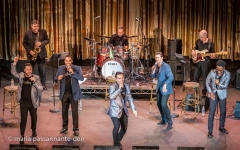 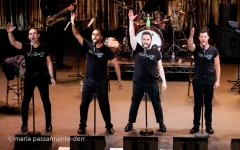 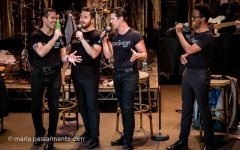 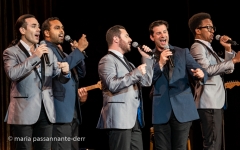 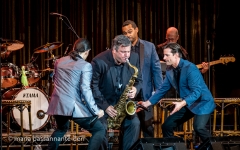