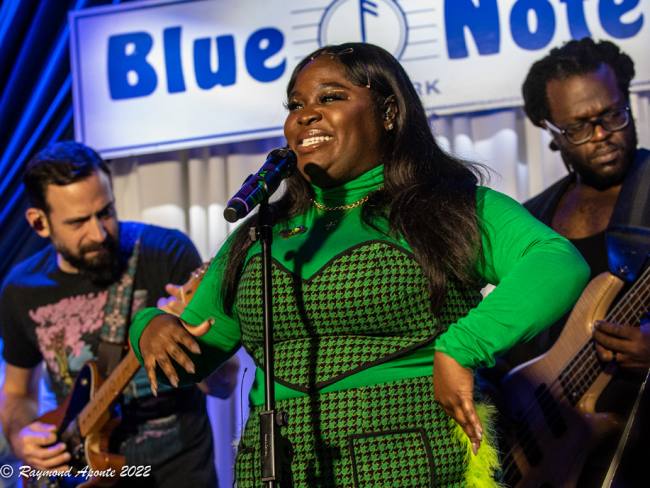 TANK & THE BANGAS AT  THE BLUE NOTE NYC

The night was chilly on Sunday nite, but the crowd on line was kept warm with the energy of the anticipated entry into the iconic Blue Note NYC on West 3rd Street in The VIllage.

The club and its setup lends itself to being an intimate and somewhat cozy venue.  It reminded me a lot of the Bottom Line in its heyday.  The tables and chairs are lined up in a way that those seated by you quickly become tablemates and conversations are started up quite quickly.

The group on this nite was made up of Tarriona “Tank” Ball on Lead Vocals, Mark Anthony Thomas on Backup Vocals,  Norman Spence on Keyboards, Joshua Johnson on Drums, Daniel Abel on Guitar, Jonathan Johnson on Bass, and Albert Allenback on Sax/Flute.

On to the show!!!! Tank and The Bangs are a jazzy, funky, hip hoppy group hailing from the grand city of New Orleans, and as that city has produced many a musician, this group has also made its mark in a big way.   The band from its inception in 2011 was surrounded by plenty of musical traditions.  The great thing about this band is that they have a talent for mixing the genres that have influenced their growth and their signature sound.

The band played flawlessly and “Tank” and her lyrical style and staccato rapping in between smooth lyrics, and spoken word had the audience energized for the entire set.  Midway thru the evening’s set the band was joined on stage with the talented trumpeter Keyon Harrold.  This lad has an old soul and his style on his horn was most definitely energizing.  This young man is someone who will definitely be making a bit of history in his own right.  His energy was easily transferred to the band and they played together as two dynamic forces merging to deliver a healthy dose of jazz to people.

Tank and the Bangas always deliver a phenomenal show as is evidenced by this year’s Grammy nomination and the next day appearance on the Today Show.  This show was attended by a big fan of Tank and Bangs, former First Lady Michelle Obama.  One for the books.  This band is a definite must see. 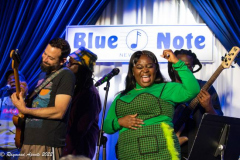