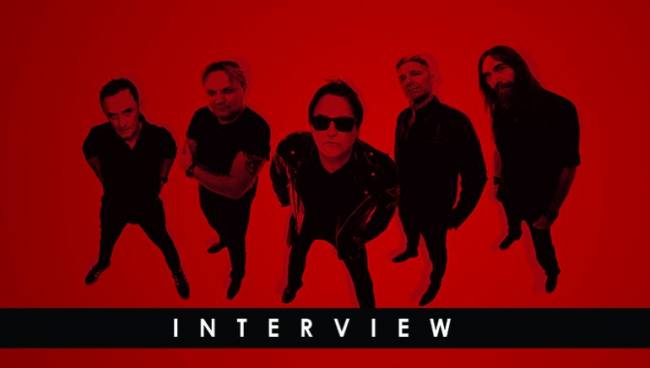 Sven Gali, the Canadian, hard rock/heavy metal band started in 1987 and has steadfastly maintained their “heavy metal” authenticity since they reunited in 2018, after an 11 year hiatus. At that time, they broke out with “Kill the Lies”, steadily moving forward in 2019 with “You Won’t Break Me” and now in 2020 with the release of  their latest EP, “3”. The current members are Dave Wanless (vocals), Andy Frank (guitars), Shawn Minden (bass), Sean Williamson (guitars) and Dan Fila (drums).

Maria Passannante-Derr: Sven Gali is a fantastic name for a hard rock / heavy metal band. How did it come about?

Dave Waneless: Svan Gali was born in one night in 1987 when we first got together. We didn’t know each other very well and we were sitting around, discussing music, rehearsal spaces and the band formation. The name of the band came up. We needed a name.  Steve, our drummer at the time, looked at the tv where the 1931 “Svengali” movie was playing and suggested Sven Gali as the name for the band. We picked it and it seems to have worked all these years.

MP-D: I can see and hear the hypnotic “Svengali” appeal in your video, “Kill the Lies”.  Is the video playing behind the band when you perform live?

DW: In the future, we will have the videos displayed behind us. It is something we are working on for our live shows.

DW:  That was our first song when got back together and came out of the gate in 2018.  We went into the studio in New York with the idea for the song, but we always leave a portion of our songs to write in the studio because things come up while we are recording. We knew the direction we were headed but when we got into the studio it came alive! We always do that, going back to our first record, “Sven Gali,” in 1992 and our second record, “InWire,” in 1995 as well. We approach our songs in the same way. The songs are three-quarters finished and when we get into the studio and we start feeling it and we make changes.

DW: “Break Me” again, was an idea. When we got into the studio, the band just took the music away and I just let them go. Then I started hearing things that I bounced off Dave Bendeth, our long time producer. Dave and I wrote the lyrics and the melody. Andy, Sean and I have been playing together for so long that they know what will be the verse.  I hear other things and we build around that. So, David and I wrote the lyrics and melody to that “Break Me”. Musically, I leave it to the band. I wrote “Hurt” and “Now”, two songs on our latest cd “3”.

MP-D: What was going on with the group during your eleven year hiatus?

DW: “Dee”, a member of the band, passed away after “InWire”.  At the time, Andy, Sean and I agreed that with the big changes happening in music and with everything else going on at that time, we put music aside because we just needed a break. We had been doing it all out lives since we were sixteen years old so we got into other things, like business.

During the break, all I thought about was “what could have been”. I had a sense of unfinished business and that we had more to offer. We did not want to return with something light. Andy and Sean agreed. We made a pact that we would come back together, come back heavy, and do it as Sven Gali or we wouldn’t do it at all. We went into the studio without any intention of doing anything, no EP, nothing; but, when we were together and we started recording, it felt right and better than it ever did. We wrote a few songs together to see where it goes. Everybody was enjoying the process and we kept going. Things just felt good.

DW: Dan and Sean played in a heavy metal band called “Varga”. We have known them for many years.  They seamlessly fit into Svan Gali.

MP-D: Any tours, projects on hold because of Covid?

DW: We had several festivals in Canada that have been cancelled. It is a shame but we all have to do what is right. When it’s time, we will be out there.

MP-D:  What is the significance of the red circular graphic that appears on your website and with your latest EP, “3”?

DW: When we were on tour with our first record, there was a tattoo artist named Buddha who created a skull design for us which became our logo on the tour passes. A tattoo artist in Thailand made this design for “3” and it is his interpretation of Sven Gali.

MP-D: Is anyone wearing it?

DW: We are all getting it. I am finishing my sleeve and going to get my back finished. It is all going to be incorporated into our brand. That a tattoo is designed for the band at this time is so fitting for us because we had a Sven Gali tattoo for our first record.

MP-D: Over the years you have toured extensively in Canada and in Europe and performed with Foreigner, Pearl Jam and Def Leppard.

DW: When the first record came out, we were fortunate to get on some tours. We played with all those bands. The Def Leppard tour was great. Meatloaf was on that tour. It was a lot of fun. We did some three day festivals with Pearl Jam as  the headliner. They were really good times. It’s a shame that everything stopped. Now more than ever people are starting to appreciate live music because it is not available.

MP-D:  Anything else you would like your fans to know?

DW: We are proud of what we have done with “3”. We are older, not kids anymore and we did this EP for us. We never thought about being on a big label and all the pressures that come with that. We wrote the music that we wanted to make, a kind of therapy for us. When “Dee” passed and we called it quits, we felt that we had more to offer back then.

When we got back together and wrote “Kill the Lies” and performed what we called “The Unfinished Business Tour”.  We never said that we broke up. We never said nothing. We have always been very good friends and we all love music. And we love playing live music.

The great thing about “3” is that everything is natural. What came out, we put on tape and I feel really good about it. At the end of the day, getting your feelings out is most important. When I listen back on what I wrote, sometimes I think, “Wow there are some deep things here!”

We have lot of friends around the world that were Sven Gali fans in ’92.  We are inundated with messages that people are excited about ”3” and seeing us perform again. We still have material for multiple albums that nobody has heard yet and we are looking forward to more new releases. With “3”, it’s “Hello, we are here and we are back”. This is us in 2020 and we have a lot of music to share with our fans over the next few years.  We want to get out and see all our friends and perform around the world again.

MP-D: Sounds like “3” is a healing journey, maybe some closure and healing from Dee’s passing and it sounds like you guys made it!

DW: From 1995 until 2018, I would listen to the first and second records and I see the change in the band. We knew that those two records represent us growing and developing as musicians, writers and performers. We were a bunch of young kids on “Sven Gali”, somewhat rough; but, now we can show our fans what we can really do;

At one point, when “InWire” came out, we were being identified with the Grunge scene. We weren’t grunge.  We were growing as people and there were changing influences in our lives. Every day since “InWire”, I have always felt that there is more original material that we have to get out. After all this time, I have to do this because it is healing and there is a lot to come.