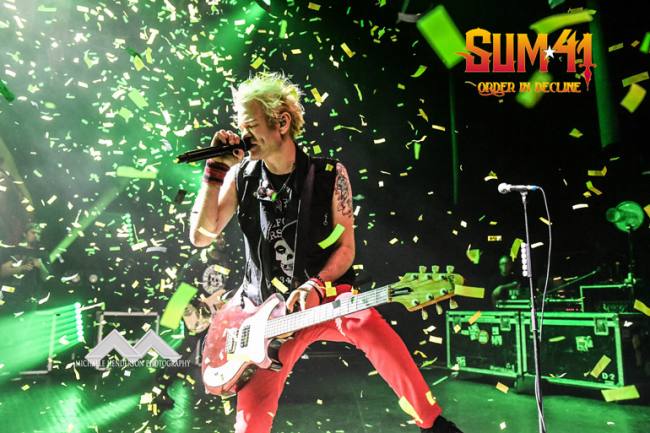 Can you say PHENOMINAL!  If you are remotely a fan of Sum 41 you want to make sure you get yourself a ticket to see the Order of Decline World Tour show.  The Fillmore in Detroit Michigan was a perfect venue to see the show on October 2nd, 2019.  The acoustics in the historic building added with the right amount to accentuate lead singer Deryck Whibley’s Canadian voice.

I’ve had the pleasure of seeing this Heavy Punk Rock band 2 other times, but they were always on festivals and the sets were shorter.  Those concerts were fun and enjoyable, so I was prepared to have a great time, but was I ever shocked at this crazy off the hook concert.

You would never be able to tell that 39 year old “Bizzy D” Deryck had a near death experience in 2014 that left him almost unable to walk after being in coma.  His energy resembled someone in their late 20’s. Thank goodness that Whibley was forced to face such drastic changes because sobriety has definitely done him right.  He looked and sounded remarkable on stage and his interaction and energy was astounding.

20 Years in the industry and 9 albums to the bands career leaves you wondering just what hits can you expect when seeing the full set concert.  A few of the biggest hits that were played included:  We’re All to Blame, Walking Disaster, Welcome to Hell, Fat Lip, Motivation, Still Waiting and With Me.

During We’re all to Blame multiple cannons released confetti into the air on the stage and on the crowd and the fans went crazy.  From that moment on the crowd participation was crazy and off the hook.  Fan were like a steady sea of hands flowing side to side, or jumping up and down.  Crowd surfers were continuous and because the sea of people were so tight the surfing was easy. The only time someone wasn’t surfing was when a circle pit was forming for a little moshing.  The Cannons shot off one more time during the first encore of the evening.

One of the biggest highlights of the concert was when Deryck went into the audience and performed Pieces.  The look on fans faces were priceless as venue was dimmed and a spotlight was placed on the guitar solo.

It was flabbergasting to watch Drummer Frank Zummo play his Drum solo in the middle of the set.  It’s clearly easy to see why he was awarded best drummer of 2017 from Alternative Press.  The solo was packed playing small portions of covers while the kick drums lit up to matching beats. A few seconds into the solo the large Devil blow-up head emerged from the ground right behind Zummo. It was a awe moment to watch to say the least.

It was like a small laser light show.  The set up had over 40 laser lights placed over the stage, included rotating digital light bars that changed colors and strobes.  Fans can also expect smoke CO2 Cryo smoke to flank the sides of the stage.

The show consisted of a total of 26 songs the remainder of the set list included: Over My Head (Better Off Dead), Open Your Eyes, Some Say, No Reason, Angels With Dirty Faces, Underclass Hero, I’m Not the One, We Will Rock You (Queen cover), In Too Deep, 88 and Pain for Pleasure.

Honestly, this was one of the best, most organized, well ran, thought out concerts of the year so far.  If you haven’t purchased tickets for a upcoming show I would encourage you to do so. 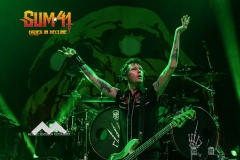 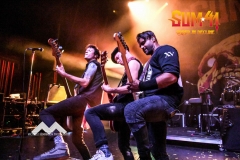 Photos and Review by Michalle Henderson