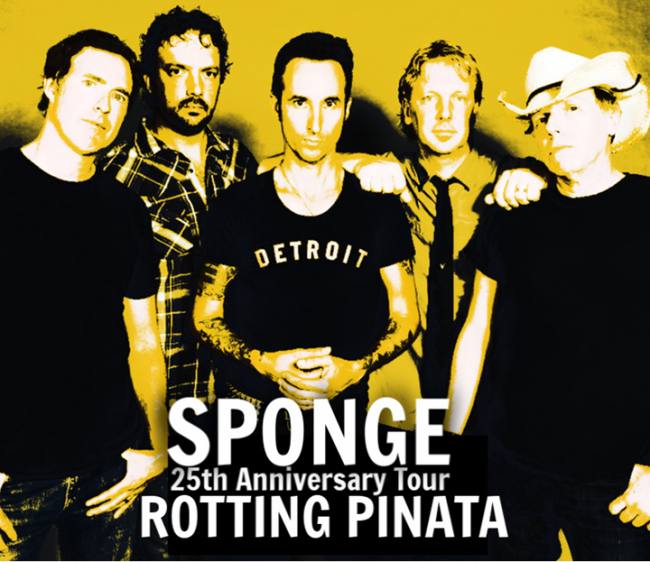 Detroit modern rockers Sponge headline The Stanhope House Main Stage (45 Main Street) in Stanhope, New Jersey on Thursday April 25. Tickets are $20 in advance and $25 day of show and now available at the venue or online at  http://ticketfly.com

Local bands Side Slam, Mind Riot, ELI – The Band, and Happy Hawthorne open the show. Doors are at 6 pm and all ages are welcome to attend.

Hailing from Detroit, Sponge gained widespread notoriety with their 1994 debut album “Rotting Piñata.” Hits like “Plowed” and “Molly (16 Candles)” fueled massive airplay on radio stations from coast to coast and were in heavy rotation on MTV in the late 90’s. The disc was certified Gold and pushed Sponge into the international spotlight, remaining on the Billboard 200 Chart for 40 weeks.

Years later, “Rotting Piñata” continues to capture the ears of rock music fans. The single “Plowed” was featured in the movies “Empire Records” (1995) and “Chasing Mavericks” (2012).  Mega radio host Howard Stern sites Sponge as one of his all-time favorite acts, and recently had the band perform live on his highly rated Sirius XM show.

Now 25 years after it’s release – Sponge is celebrating “Rotting Piñata” with a national tour, including a stop at The Stanhope House Main Stage.

Sponge will be performing tracks from “Rotting Piñata” in addition to hits from their extensive catalog including “Have You Seen Mary,” and the title track ffrom their critically lauded sophomore CD “Wax Ecstatic,” plus songs from the band’s most recent release “The Beer Sessions.”

Don’t miss a great night of rock with Sponge!

Visit http://stanhopehousenj.com for more information on the show and venue.