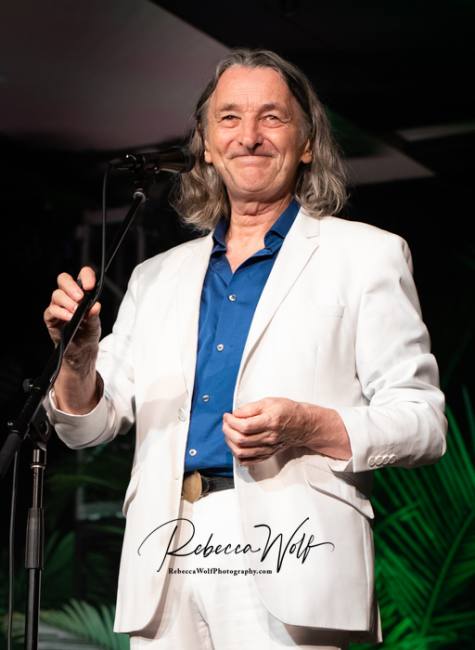 Having just attended two Roger Hodgson shows, I’m convinced Roger is the warmest, kindest, and most genuine individual I’ve  seen on stage, possibly ever. Roger Hodgson is the English singer and songwriter best known as a founding member and co-frontman of the band Supertramp. Supertramp’s first hit record, “Crime of the Century”, was released in September 1974. “Even in the Quietest Moments”, their third album, released in 1977, produced one hit single, “Give a Little Bit.”  However, it was the album, “Breakfast in America”, released in March 1979 and written in a more pop-oriented approach, that reached #1 in the US, with 4 hit singles. Hodgson composed and sang the majority of the band’s hits, including “The Logical Song”, “Take the Long Way Home”, “Breakfast in America”, “Give a Little Bit” and “It’s Raining Again”.

In 1983, Roger left the band and the LA scene to live a quieter lifestyle with his family in Northern California. In his home studio Roger recorded 3 solo albums. In 1984, he released “Eye of the Storm”, an international hit, selling over 2 million copies. Then in 1987, the week his 2nd album, “Hai Hai”, was released, Roger fell and shattered both wrists. Doctors stated he’d never play again, but Roger proved them wrong and within a year and a half had returned.  In 1997, after 10 years, Roger returned to the road, and released a live album documenting the tour, “Rite’s of Passage”. This was followed in 2000, by Roger’s 3rd studio album, “Open the Door”, which has been described as sounding the closest to his Supertramp days. Over the following years, Roger toured as a member of Ringo Starr and His All-Starr Band, was honored by ASCAP, performed at the Concert for Diana at Wembley Stadium, was honored in France for his contribution to the arts and has continued to tour the world.

Wherever Roger performs, the audience has the same reaction. They feel a connection to both Roger and his music. Those who know the lyrics to Roger’s songs are aware that his songs speak about experiences and feelings, typically his own. However, these experiences and feelings are relatable to all. Sometimes the feelings are lighter and more up-lifting. Other times they are deeper and more melancholy. However, regardless of the nature of the feelings, the way Roger connects the songs to himself, draws everyone in and builds that unmistakable connection to his audience.

At each show, Roger shared what he was feelings when writing many of the songs and how the songwriting helped him at different points in his life. While many of these songs were written decades ago, Roger sang them with the same emotion and connection, as if they came from his heart yesterday. The voice that sang these songs remains rich and warm, the same beautifully unique voice that Supertramp and Roger Hodgson fans have loved for years.

Roger connects to his audience through more than his music.  His overall interaction with his fans, along with his genuine nature is astonishing apparent. During the shows in both Philadelphia and NJ, Roger comfortably chatted from the stage and welcomed the audience into his world. It was as if Roger was there “with” everyone rather than separated from them. Roger expressed delight with the enthusiasm being shown to him, and in Philadelphia, his first stop on this leg of the tour, he expressed to the band, “It was a great choice to start here. We have to come back!”

Throughout the evening at SugarHouse Casino, there was a relaxed atmosphere you don’t see at most venues. Maybe this was a result of the venue staff, who were very welcoming and accommodating, as well as the vibe Roger brings to all his performances. During the show fans were standing, singing and dancing. Other fans took photos and videos, and no security interrupted. Between songs a woman approached the low stage to speak with Roger. Roger bent down and spoke to her and smiled. A short time later he happily announced he was playing a song,“for Robin for her birthday”.  Many times during the night shouts of “I Love You Roger,” could be heard from the audience. Roger delighted in the praise, responding with a “thank you”, or a smile, and in one instance, “I’m not sure what you said, but keep saying it anyway!” knowing the shouts were all of love and support.

Roger performed at Bergen PAC with as much enthusiasm, warmth and kindness….if not more. On both evenings, Roger showed appreciation for the talents of his wonderful band members, including his two long time members, bass player and backing vocalist, David J. Carpenter,  and drummer, Bryan Head, as well as his two new members, keyboardist and backing vocalist, Ray Coburn, and saxophonist, keyboardist and backing vocalist, Michael Ghegan. However, on this evening, Roger made a special point to highlight Michael Ghegan, and his exceptional musical talents.  Michael is from Red Bank, NJ, and a proud and enthusiastic crowd of family and friends were present to be part of Michael’s performance. Roger warmly welcomed Michael’s family and friends, and played, “Breakfast in America,” “for Michael’s mother, Barbara, because mothers are special”, remarked Roger.

To say that Michael is talented is an understatement. Michael’s skills are extraordinarily impressive. Michael played multiple saxophones during the course of the show, seamlessly switching back and forth between the instruments. He additionally played keyboard parts, added in various whistles and horns, and sang backing vocals. Michael had several solos throughout the evening, and all attention in the room was immediately locked into the wondrously melodic sounds of his saxophone.  Knowing Michael’s been with the band for less than 2 months makes his skills that much more unbelievable. The adoring crowd was eager to praise Michael with exuberant applause and Michael took it all in with a twinkle in his eye, and a slight grin on his face as a friend shouted, “You go Mike!”

During both shows, Roger played a combination of his beloved Supertramp hits, as well as favorites from his solo albums. He moved from playing keyboards, to various guitars, to the grand piano. All the while he stopped to chat and make connections with his audience. Last year was my first experience at a Roger Hodgson concert. While I always loved Supertramp, I didn’t know Roger’s solo work. When I attend a concert I typically feel less engaged if I don’t know a song. This was not my experience with Roger Hodgson. I was drawn into every song and loved each one. I found myself needing to immediately find the set list and get all his music. Since then, I have not found a song of Roger’s that I don’t enjoy or connect to.

The additional members of Roger’s band, while not front and center, played an essential  role in creating the full, tight sound of the band. Ray Coburn, playing two keyboards, added richness and depth to Roger’s guitar and keyboard parts. During “Child of Vision”, Ray played a beautiful solo part which showcased his immense talent on the keys.  Drummer Bryan Head, expertly added chimes and maracas to the percussion section during “Death and a Zoo”, creating a transformative ambience. Bass player, David J. Carpenter, doing backing vocals, demonstrated his singing abilities while harmonizing with Roger, and provided a consistently strong rhythmic bass throughout the set.

The band gels quite harmoniously, especially considering it has two new members. I believe this is a sign of the extraordinary talent of all the musicians, the wonderful material they have to work with and their fabulous leader, Mr. Roger Hodgson. It’s been a few days since I attended my last performance at Bergen PAC, and the feeling has stayed with me. It’s a feeling of warmth and connection towards Roger Hodgson and his music, as well as the burning desire to see another show the next time he is anywhere in the area!

Hide in Your Shell

Lord is it Mine

Death and a Zoo

Even in the Quietest Moments

Had a Dream (Sleeping With the Enemy)

Give a Little Bit 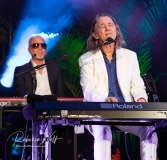 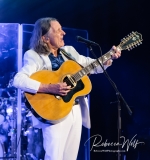 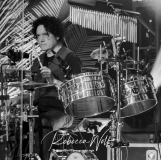 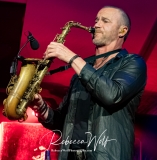 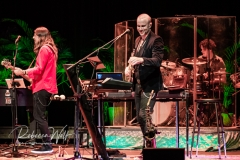 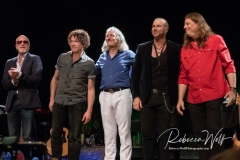