What can you say?  HE’S A BEATLE!!!!  He’s been knighted by the Queen of England!   He has been given Kennedy Center honors by the United States, He is the top selling/grossing/award winning musician of all time!  We can go on and on….  He’s Sir Paul McCartney, MACCA for short, and he put on a show to end all shows on the very special date of 9-11 at New Jersey’s Prudential Center.  Hitting the stage in a very “BEATLE-ESQUE” black blazer, the 38-song mega set list opened with A HARD DAY’S NIGHT.  With one of the most extensive catalogs in music, the superstar selected from Beatles, Wings and more recent solo material, wowing the multi-generational crowd with each note.  Sir Paul also thrilled by switching between Bass, acoustic and electric guitars and upright and baby grand pianos.   Particular high points were the pyro-laced James Bond movie theme song LIVE AND LET DIE, the most covered ballad of all time YESTERDAY, the super popular BAND ON THE RUN, the glorious hymn-like LET IT BE and of course HEY JUDE.  Fit and still youthful in appearance, this 75 year old legend can put any band of today to shame.  He has no intentions of retiring any time, so you all should get out there and see the greatest act of all time the next time he is in your area!!! 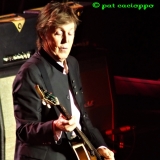 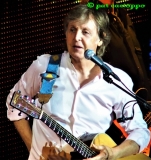 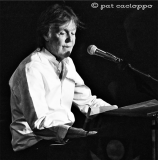 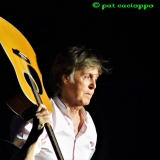 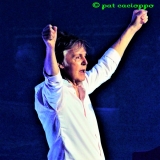