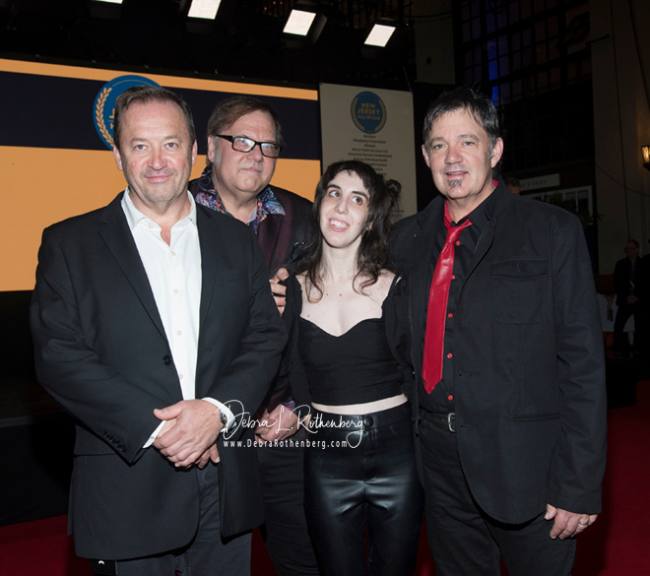 The New Jersey Hall of Fame Induction Ceremony took place at the Paramount Theater in Asbury Park, NJ and it is always a thrill to see my fellow New Jerseyeans celebrating people from my favorite state. This year was no different but even more special because one of my favorite groups, The Smithereens, were inducted. Not only do they make great music, but they are a special group of men. Sadly, Lead singer Pat DiNizio passed away a few years ago but his daughter Liza joined band members Jim Babjak, Dennis Diken and Mike Mesaros. E Street band member Garry Tallent inducted them, saying:

“First of all, I just wanted to say, it’s an honor for me to be introducing my pals into the New Jersey Hall of Fame. I’m here as a fan who happened to catch them on an appearance on “The Uncle Floyd Show” — anybody remember that? -at a time when synth-pop groups were all around. I witnessed a two-guitars, bass and drums rock ‘n’ roll band that had obviously taken the time and effort to study the music that came before them, then to take it to a place that was true to its roots, but had a completely unique identity. With song titles borrowed from film classics such as “Behind the Wall of Sleep,” “Blood and Roses,” “In a Lonely Place” and “Strangers When We Meet,” the songs were fresh, current, and danceable pop music.

I’m not sure exactly how we became acquainted, but when we did, it was apparent that we shared a love for old records, guitars, music in general, and they are just cool guys. So many bands broke up before they ever played a note, because they couldn’t agree on how to split the merchandise royalties. These guys were in it for all the right reasons.

I left New Jersey in the ’80s and I kind of lost contact with them, as their star rose, and their greatness was noticed by the masses. But in 2001, I met up with them back in New Jersey at the Count Basie Theatre, for an event for the families of 9/11 victims. That night, I asked Dennis to play drums. He played great, as usual, and brought along the group to share the bill. It was great to see them, and see that they were doing well, still playing that rock ‘n’ roll music. They have continued on, after having lost their lead singer and major songwriter, Pat DiNizio, a situation that would lead lesser bands to throw in the rock ‘n’ roll towel. And now, here they are, being inducted into the Hall of Fame of their home state – a banner they have proudly waved all these years.”

Jon Bon Jovi had the honors of inducting Southside Johnny saying, “Southside Johnny Lyon. Singer. Songwriter. Harmonica-playing leader of the Asbury Jukes. It is my honor to be here tonight, to induct my friend into the New Jersey Hall of Fame.

As I have said many, many times before, without Southside Johnny, there would not have been a Jon Bon Jovi. I grew up on the sounds of Bruce Springsteen and the E Street Band, but I always wanted to be an Asbury Juke.

When I started out in the late ’70s, Bruce had already released four albums. The Jukes had released three. And there was something in those songs that connected with me. Those guys made Asbury Park, N.J., a place where the impossible seemed possible. You didn’t have to go to Los Angeles or to London. In fact, we didn’t even have to go to New York City to play our own songs. Back then, coming to Asbury Park was like going to church, and seeing a Southside Johnny show was like witnessing a tsunami of sound led by a singer who delivered every song like it would be the last one he’d ever sing. The Jukes dared you to stand still. Songs like “This Time It’s for Real,” “Trapped Again,” “The Fever,” “I Don’t Want to Go Home” and, of course, Sam Cooke’s “We’re Having a Party” invited us all to the party. From the first song to the last, you couldn’t help but raise your hands and shake your ass.

And at that time, it wasn’t hard to run into one or more of the Jukes in the clubs or on the boardwalk. Maybe that’s another reason why we loved them so much. They were approachable. I have many memories of LaBamba teaching the Atlantic City Expressway the right way to perform several soul songs. Or Tony Pallagrosi and Kevin Kavanaugh jumping up and playing with my band. Each one of the guys would give this young kid words of encouragement and treated us like we were part of the scene. In 1980, Johnny actually produced some of the first demos I sang on, as a member of a band called The Rest, and he let me open shows for him any time that he could.

Now, let us also remember this: Southside Johnny is and always was a great frontman. I went to school on Southside’s showmanship. He was not the kind of guy that you would ever want to follow on a stage. After any Jukes show, you were equally, and always, exhilarated and exhausted.

Early in my career, Johnny taught me what headhunting was, and that was finding a trick that you could leave a mark on the headliner while you were making your mark on the audience. I never forgot that. Throughout my career, Johnny’s been a friend, a mentor, a bad influence, and sometimes a cranky son of a bitch. But it’s those qualities that make anyone who’s ever known him, worked with him or just come to see his shows, love him. Because John is real. He always has been. He wouldn’t play the game by anybody’s rules. In fact, he didn’t play. He worked. And he’s still working over 45 years later.

Now, I will tell you a secret. He didn’t want to be here tonight. When I heard that he was being inducted, I was afraid he wouldn’t show up. Not because he didn’t appreciate it. No. ‘Cause I know that he does. But because he always told me to remember it’s not about the award you get for the work you’ve done, it’s the reward that you get when you get to do what you love, and you do it well. When I got the courage to call him and to tell him that I had to be the one to induct him, it was for selfish reasons. Because I wanted to be the one with the loudest microphone, standing here tonight, to say that we all love you, and that we are collectively presenting you and your Asbury Jukes with this honor, as our way to say thank you. Thank you for the music and for being you.”

Southside Johnny said: “Thank you very much! Thank you. …I am very proud to be from New Jersey. And when we started out making music, and making records, that was not something you could say. We tried to play in New York City. If we told them we were a New Jersey band, they’d say, “We don’t want you.” Philadelphia … a little bit more welcoming, but not that much. I grew up … my parents would watch Johnny Carson, and he would make jokes about New Jersey, and I always wondered, what was that all about? What was it that was different about New Jersey, from any other state? But I learned from going to New York and Philadelphia and other places and playing, that there was a real ax to grind for me. I wanted to prove that New Jersey was as good as any other state, as far as the music was concerned, and that made me stronger, more aggressive. I worked my ass off. So thank you, New Jersey!

Like The Smithereens say, I couldn’t possibly thank all of the people who’ve helped through this long, long career. So I’m not going to try. You all know their names. You all know their accomplishments. I’m gonna thank two people. Well, three. The fans. And my mother and father … they had great taste in music. But they came home from work and played their records loud, danced, sang along, listened. It was important to then. Music was one of the biggest enjoyments of their life, and I learned from them to appreciate music that way.

When I first started singing, I couldn’t believe I was getting a chance to do what heroes like Otis Redding and Ben E. King and Billie Holiday were doing. It’s been 50 years now, since I started singing, and I guess I’m still doing it. I think I got a couple of gigs this weekend. But anyway, thank you very much for voting me into the Hall of Fame. I just don’t know what else to say, except, who’d a thought? Thank you very much.”

A THRILL for me was seeing my long time friend, Jersey Shore Musician Amy Broza on the stage, singing along with Darlene Love and Tim McLoone’s “Holiday Express.”. If you haven’t heard her sing..make a point of it.

The Hall will be moving to the American Dream retail and amusement center at the Meadowlands in East Rutherford next year. 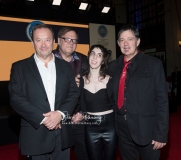 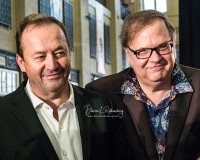 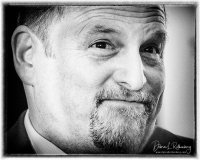 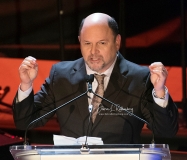 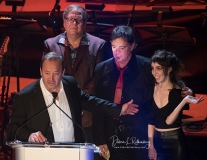 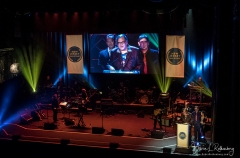 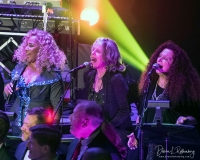