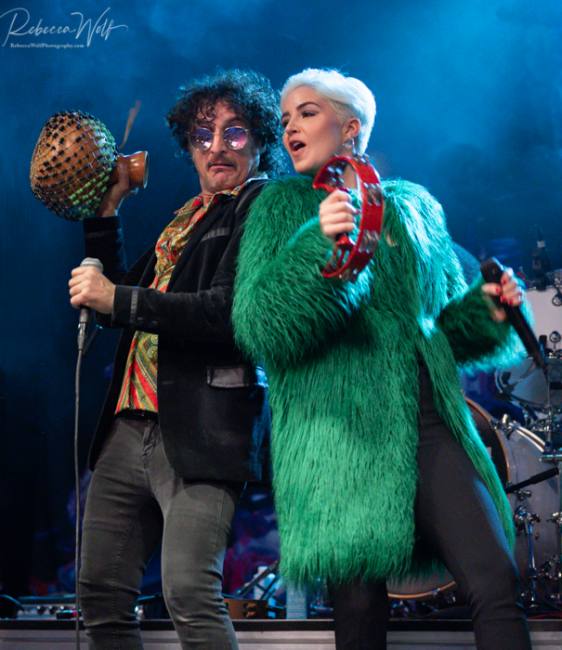 When I attended the September performance of Maggie Rose and Them Vibes in Bethlehem, PA (with opening act Dylan Hartigan), these artists were new to me. I was immediately drawn in by Dylan Hartigan’s beautiful, soulful singing and songwriting, by Them Vibes’ funky, upbeat groove and the effervescence of bandleader “Brother Love,” and by the range of Maggie Rose’s voice…from warm and velvety smooth, to edgy and powerful. As I left the venue that evening, I knew I’d be coming back the next time these musicians rolled into town.

With these high expectations, I arrived at the Asbury Lanes, in Asbury Park, NJ on 12/8/21. Asbury Lanes is a unique establishment…. a combination of bowling alley, musical venue and diner. While the venue was renovated a few years ago, there remains a bit of an old-time feel; maybe it’s catching a glimpse of some classic bowling lanes at the back of the room that gives that homey vibe. As the crowd began to filter in and situated themselves around the stage front, I found myself beside a gentleman eagerly awaiting the beginning of the show. Like myself, this man had first encountered Maggie Rose and Them Vibes in Bethlehem, PA, and was so enthused by what he’d heard he’d been an avid fan ever since. I guess I wasn’t the only one who only needed to see and hear these musicians once to be sold!

As dim lights arose on the stage, Dylan Hartigan emerged, joined by guitarist Dan Toppo. From the moment Hartigan began his set there was little doubt that my expectations were going to be satisfied. Since having seen Hartigan in Bethlehem, he has released his first LP, The Way My Bones Creak. The album includes previously released singles, “Moonlight,” with a beautiful, haunting tone, “Stop Look and Listen,” a passionate, indie folk song, and “Gold Rush,” an incredibly soulful, gorgeous number. Also included on The Way my Bones Creak are several new songs that continue to demonstrate Hartigan’s soul searching, heartfelt music and lyrics, including the exquisite duet, “Wait for Me,” featuring Maggie Rose, which stops you in your tracks with its beauty, as well as “Mary Made Me,” with Hartigan’s expressive, tender tone bringing the lyrics to life. Beyond Hartigan’s immense musical skills, what remains so endearing about Hartigan is his overall demeanor. While there’s part of Hartigan that presents as laidback, calm and cool, with an air of confidence, Hartigan also shows a youthful vulnerability, with his heart on his sleeve and a desire to be liked and accepted. It’s these traits that add further dimension to Hartigan’s already impressive artistry and locks fans in to returning for more.

If the moniker “Brother Love” wasn’t hint enough that the lead singer/frontman of Them Vibes (and the band themselves) has a flair for funk and groove, then maybe the burning incense would add that hint. Standing close to the stage and smelling the incense wafting through the air, there was a sense of calm that complemented the energy on stage, generated by “Brother Love’s”  exuberant singing, dancing and playing the shekere (African Drum.) “Brother Love’s” spirit was infectious and it was hard to take your eyes away from him or to not have a broad smile across your face.  Throughout the band’s set, every member, guitar players Kyle Lewis and Alex Haddad, bass player Judd Fuller, keyboardist Kaitlyn Connor and drummer Taylor Jones, added flavor to the vibe on the stage. The energy on stage easily translated to the crowd standing below, as fans danced, sang and felt “them vibes.”  The enthusiasm in the crowd and the energy on stage further escalated (if possible) when Maggie Rose joined Them Vibes for their signature song “Electric Fever.” Wearing a furry green, eye-catching coat and playing the tambourine, there was an unspoken connection between Maggie Rose and “Brother Love” as they sang, danced and jammed like musical sparring partners.  A perfect transition for Them Vibes to turn over the spotlight to the incredibly talented, dynamic Maggie Rose.

When Maggie Rose returned to the stage, sans green fur, she took her place front and center for the remainder of the evening, as “Brother Love” transitioned to percussionist/vocalist and Them Vibes remained as Maggie Rose’s band.  Moving out of the spotlight did not diminish “Brother Love’s” presence, as he remained a consistent musical and energetic force for the remainder of the performance. Beyond her beautiful vocals and skillful songwriting, Maggie Rose has a flair for performing; she lit up the stage with her brightness and commanded attention. At the same time, Maggie Rose presented with accessibility and familiarity. The warm, connected interactions between Maggie Rose and the members of Them Vibes contributed to the overall aura of genuineness and positivity. Maggie Rose opened her set with three songs from her newest album, Have a Seat, “Do It,” an upbeat anthem, “Telephone,” a song with a rhythmic, jive feel and “What Makes You Tick,” a jazzy, blues number. Also from Have a Seat was the beautiful, sultry “Saint.” Additional songs in the set included “Hey Blondie,” with a clap along, dance-to-the-beat feel and the bluesy “Smooth.” Maggie Rose’s most recent release is a rendition of the illustrious Carole King’s “I Feel the Earth Move.”  Maggie Rose’s interpretation gives the song its own identity, as a deep, slow, beautifully moody musical expression.

Throughout the set Maggie Rose’s connection to her band members was on display, as she sang face to face with guitarist Alex Haddad, and side to side with “Brother Love.” This feeling of connection, exuberance and positivity lasted throughout the remainder of the set, as the band members jammed, sang and grooved together on stage. For the evening finale, Dylan Hartigan returned to the stage, completing the “family-like” connection created by these musicians. This bond was further confirmed after the performance when I overheard Hartigan at the merchandise table being asked if he was still in NJ. “Well, I’m from NJ but I just moved to Nashville with these guys,” he replied. How wonderful for a 25-year-old musician, new to the business, to have a musician family for support and guidance. It’s this warmth that emanates from the stage, along with the incredible music of each artist, that makes you want to return for more. My expectations for the evening were surely met…and then some. I will surely return for Maggie Rose, Them Vibes and Dylan Hartigan the moment they swing through town again. 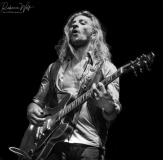 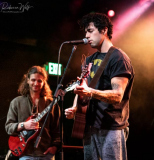 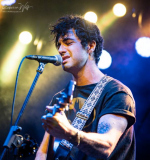 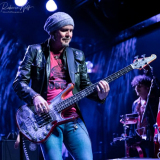 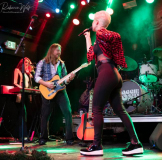 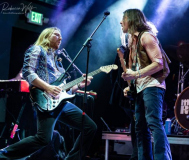 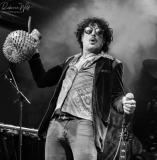 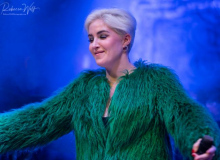 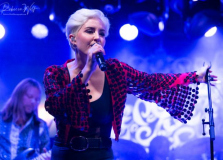