16 studio albums, 13 live albums, NO radio air play, yet they drew a crowd of over 250,000 to their ROCK IN RIO show in 2001.  Iron Maiden IS Heavy Metal personified, (IS THERE another Metal Band??) And these Metal Monsters (along with their REAL Monster mascot, Eddie), rocked NJ Head Bangers to the core as they brought their double-disc BOOK OF SOULS Tour to Newark, NJ’s Prudential Center.  A Maiden show is a true experience; with the over the top expressive antics of front man Bruce Dickinson, the TRIPLE guitar perfection of Adrian Smith, Dave Murray and Janick Gers, the pounding insanity of drummer Nicko McBrain and leading it all, founding father bassist Steve Harris, who most consider the best bass player to ever live.  Couple that with the ever changing stage sets and the cameo appearances of “mascot Eddie” and you have a show for all the senses, as well as all the ages.  All thrashing aside, however, Maiden’s music has many meaningful messages, and is beautifully executed by men who have played together they can finish each other’s notes!  Iron Maiden’s fans are also a loyal brotherhood, that make attending a Maiden concert an almost religious experience.  The faithful were treated to such favorites as POWERSLAVE, THE NUMBER OF THE BEAST, WRATHCHILD, THE TROOPER and WASTED YEARS.  This is the stuff legends are made of!!! 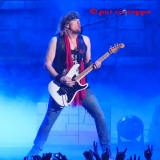 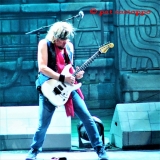 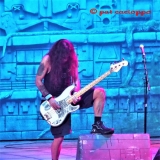 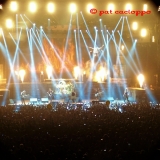 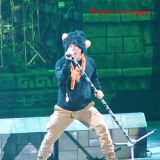 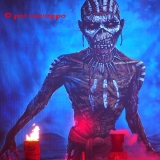