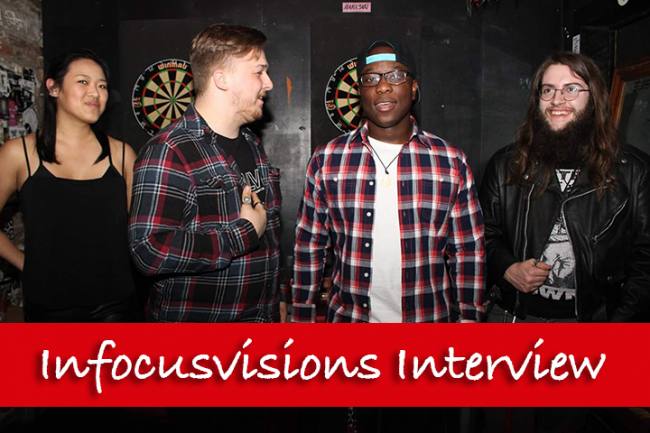 On Saturday, June 8, 2019, I had the pleasure of speaking with Steve Hawthorne and Ben Gallagher of Morristown-based band Happy Hawthorne.

Nick Scalera: How did your band get its name?

Happy Hawthorne: Well, the funny thing is that I didn’t pick it. I used to work at this recording studio in Morristown and the owner and I became close. He would always say “Hey, it’s happy Hawthorne!” every time I’d come into work. I thought it was funny, but he said “that actually wouldn’t be a bad band name” so I just stuck with it all these years.

NS: I first heard your band back in April, 2019 opening up for Sponge at the Stanhope House. Can you guys tell me what that was like?

HH: That was actually our first show in a long time but when we first got started gigging, the Stanhope House host/manager named Erin was just so friendly with us and gave us the best shows in the time slot. It’s a real pleasure playing at that venue. To be honest, I didn’t really know who Sponge was before we went up there, but they were they were fantastic!

NS: What’s have you been working on these days?

HH: Right now, we’re working on just trying to plan for the next two months to record and trying to book ourselves until the end of the Summer. We are hoping to start a small tour around New Jersey before venturing outside the State.

NS: At this point in your careers how would you define success?

HH: Well, right now I feel like we kind of backtracked a little bit from where we used to be. We were out gigging and probably about a year ago, that version of Happy Hawthorne broke up and I started this new version and we’re kind of starting from the ground up. But you know, we’re trying to put as much work as we can to get back to where we used to be.

NS: How important is social media to the continuing success of your band?

HH: It’s it’s very important and that is probably be trickiest as part of trying to break  out on the scene is trying to figure out a way to get fans to notice you and be like “these guys are great, let me tell you my friends and family!” It’s it’s a tough, tough thing to break into, that’s for sure.

NS: What social media platforms do you think are the most important for bands and what have you had the most success with?

HH:  I’ll probably have to say Instagram which, I feel is the most popular out of all the social media outlets nowadays. Everybody goes on Instagram – that’s where you become Instagram famous!

NS: What’s the current landscape for up and coming bands in the Tri-state area?

HH: It’s hard to pinpoint exactly where the next up and comers are from around here because it seems a little bit tricky in Jersey. There’s the Meat Locker in Montclair, New Jersey but I haven’t played there yet. There are a lot of good bands there constantly as well as The Stone Pony in Asbury Park, New Jersey where a lot of big names have come through like Bruce Springsteen.

NS: Are you guys getting any attention from mainstream radio stations? I am looking forward to driving down Route 10 and turning on 105.5 fm – WDHA and hearing your band.

HH: Not yet, but you never know!

NS: After seeing your band live, I was blown away by you guys. In checking out your band on social media, I’m hoping that your band is going to make it to the next level.

HH: Thank you very much! Yes, I hope so – that would be an absolute dream! We are currently working with this guy named Brandon who actually signed us to his record label. We’ve been interviewed on internet radio and gotten air time, so we’ve gotten some exposure.

NS:  That’s awesome, because in this day and age, somebody connected to a label, or radio station, etc. hears something and you never know.

HH: It’s literally about being in the right place at the right time with the right person and that could be history right there.

NS: I absolutely I agree! Is there anything else you guys would like to share with us?

HH: Just be on the lookout for Happy Hawthorne because we’re working on new material and please check us out on social media!