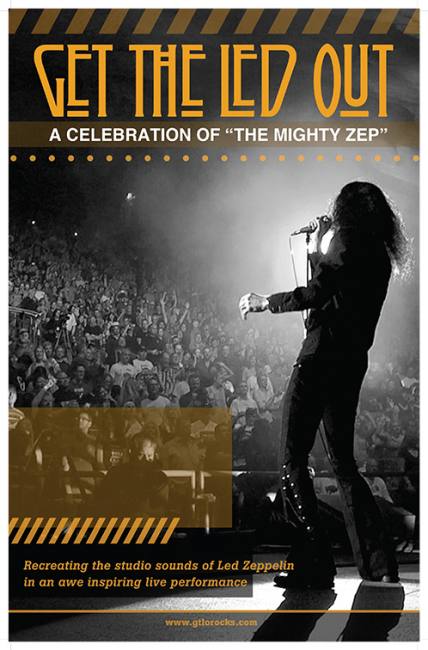 MONTCLAIR, N.J. – July 16, 2019 – Led Zeppelin tribute band, “Get The Led Out” is bringing its show-stopping renditions of the band’s biggest songs to Montclair, N.J.’s premier concert venue, the Wellmont Theater, on Friday, Aug. 16 at 8 p.m.

The group of professional musicians came together to bring their passionate love of Led Zeppelin music to life for local and regional audiences. It is their mission to bring studio recordings of “The Mighty Zep” to life on concert stages throughout the region. The band’s members are the first to point out that “this is not an impersonator act but rather a group of musicians who were fans first, striving to do justice to one of the greatest bands in rock history!”

Get The Led Out shares this “Mighty Zep” appreciation by recreating the band’s hits for eager audiences. The spot-on renditions carry undeniable authenticity and a chemistry rivaling the group that took the world by storm in the late-1960s and ’70s.

The group, which began making music in the fall of 2003, stated on its website that “Zeppelin’s mythic status is mostly based on the overwhelming impact of the iconic studio recordings, and the public’s insatiable desire to relive and re-experience those musical masterpieces over and over.”

According to the band, “Get The Led Out is the only act out there devoted to painstakingly recreating the songs in all their depth and glory.”