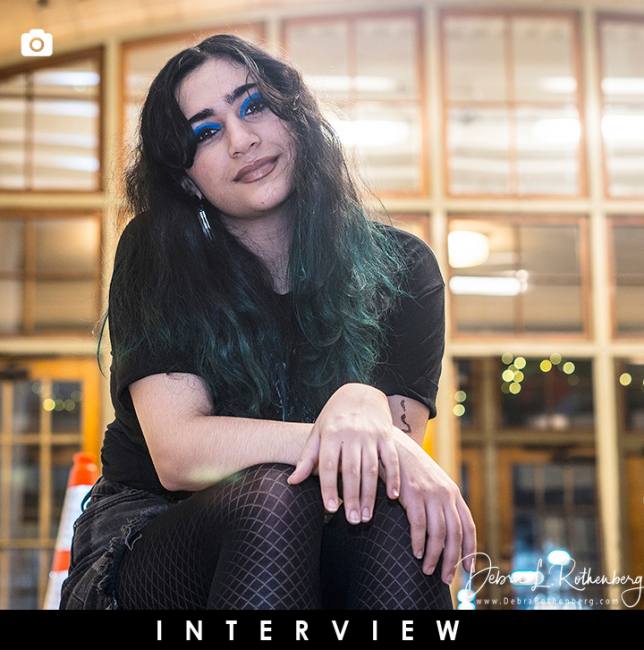 Born in New York, Cindy Latin, as a teenager, was enamored with Broadway, excelling as a vocalist in musical theater all her life.  She pursued formal studies at the Boston Conservatory and graduated from Berklee College of Music with a major in Songwriting, Contemporary Writing and Production and a minor in Theory of Jazz and Popular Styles. It was her internship in the Clive Davis Songwriting Program at New York University that inspired her to pursue songwriting, arranging and eventually producing her original songs. In the last two years she has release eleven plus singles and a video. Read more about Cindy and hear her at  www.cindylatinmusic.com.

Maria Passannante-Derr: Your evolution from vocalist to songwriter, arranger and producer seems inevitable?

Cindy Latin:  Being a vocalist came first; but, I was really excited to learn how to write. It was apparent to me that there are so many other avenues of music to pursue. I still want to do theater; but, the more that I am able to do, the more opportunities there will be. I like to switch it up from time to time and focus on something different.

MP-D: How would you characterized your current sound?

CL: Rhythm and blues with a definite jazz and theater influence.

MP-D: You are a very productive artist.

CL: I released a lot of singles, almost twenty, to date. I do singles rather than albums.  I can always be putting something out rather than waiting for the completion of an entire album. That way, there is always something out there for listeners to check out.

CL: That was the first song I ever wrote and recorded in 2017. I was just emerging from musical theater so I had a producer and a songwriting mentor who gave me some guidance. The track reflects a mixture of what I was listening to at the time, live music and electronic pop.  We came up with something in between. A videographer at school who loved the song, approached me to make the video. I wanted to convey in the video what I wrote in the song, just how limiting school is to a person individually because everyone is assigned to create the same thing.

MP-D: Which of your talents has liberated you from this pattern of what everyone else was doing and moved you forward creatively?

CL: Writing is where it starts. That is where you get to be the most honest. For example, no one wants to hear a person complain but put it in a song and people will listen. Arranging and producing came a bit later. In the beginning when I worked with arrangers and producers, I felt a disconnect because I needed their guidance to help me communicate; but, now I have more of a vocabulary, more resources to articulate what I want to say musically and one hundred percent control.

MP-D: Your track “In a Year From Now”, written a few years ago, is it relevant today?

CL: That song was about the anxiety of graduating college, leaving a safe space and going out into the real world. I was honing my skills at school so I knew I was going in the right direction. This was the first track where I took the driver’s seat. It’s success on Spotify gave me confidence.

CL: All four parts were recorded pre-COVID and have been in various stages of mixing and production over the last nine months. They are all “big band” recordings, eighteen musicians, including me, characterized by the same orchestration and similar sound. As for the pandemic itself, I miss playing live. That was a big part of what I was doing at least a couple times a week, whether my own gig or something else. On the other hand, I am glad to have had time to work on writing and my social media. Sometimes it is good to write a song in different ways because only one or two of them will be decent; so, I try to write songs from the perspective of characters I read in books or in movies.

MP-D: What is your attraction, as composer and arranger, to the “big band” sound?

CL: I took a class on specifically writing for a “big band” ensemble. The old jazz standards are great but I wanted to hear how it sounds with my music. I have been inspired by non-traditional, amazing composers like the band leader, Charlie Rosen, a Broadway writer, arranger and performer, who does “big band” arrangements that include funk, r & b and rock.  He lets me sit in on his recordings and performances. Also there is a producer called “ Brasstracks”. Their work is more  contemporary. They have given me feedback on how to incorporate some more electronic elements into my music.

MP-D: Who are some other influences?

CL: Tori Kelly is one of my favorite vocalists. She is brilliant.  I love her and I studied her sound in high school and transcribed her. I was exposed to Coltrane when I was in college and like Monk, I was influenced by their harmonic choices and patterns.  Stevie Wonder, however, is my number one influence. He does things that are crazy complex that musicians appreciate but it is not overboard.

MP-D: Were you drawn to music or a particular instrument as a child?

CL: My parents tried to get me into the piano but I would not commit. I was into singing and I took a lot of lessons, singing, acting and dance. I would go once a week to seek a Broadway show and I loved trying to imitate my favorite singers on Broadway. I was a super, super Broadway fan and always go to the stage door after shows.

MP-D: When is Part Three going to be released?

CL: “I  Am Looking” is coming out in a few weeks around January 12, 2021. This one is lyrically one of my favorites. I wrote it before the pandemic but it has been something that I have felt a lot during the pandemic, anxiety and all the things we do to try to get away from anxious feelings that don’t’ work instead of facing it. Part Four has also been recorded but I am reworking it as I am not sure the direction it will go.

MP-D: What is the Cindy Latin live experience when you perform?

CL: Definitely not a full big band. I do three horns, a rhythm section of three or four players. It’s fun to do a lot of call and response with the vocals. I love to hear my musicians take solos so there is usually about seven of us. We play all around the City, like Rockwood. Then there is a company, Sofar Sounds, that takes place in a casual environment,  like somebody’s house or  apartment or restaurant after hours. It’s a guaranteed audience of 50-150 people who have no idea who is going to play.

MP-D: What inspires you as an artist year in and out?

CL: I just try to do whatever I want to do in that moment because I can get antsy or bored. There is a period of a couple of months where I don’t what to arrange but all I want to do is write a ton of songs. Listening to a lot of people can freak me out  because I say to myself, “there is so much good music out there. How can I keep up?”; but, the majority of the time, I want to figure out how they do it.

MP-D: How do you process your creative sparks?

CL: I have two different lists on my i-phone: the first is called “Song Seeds”, things to actually write about, like emotional ideas and chord progressions and songwriting ideas. The second list is for arranging and producing like if I hear a bass I like in a song, I will write it down or a link to the song.

CL: Not a lot of formal traditional writing collaborations but my big band of seventeen musicians is a type of collaboration. Writing partners can be challenging and for me personally hard to find a similar mindset and because to a degree it requires compromise.

MP-D: How do you control seventeen musicians and bring them to the point where they give you the sound you want for the arrangement that you have created?  Do you conduct?

CL: I do a little conducting in the sessions but I hope that my writing is articulate enough for them. I rehearse with them before hand and iron out any issues. Sometimes we work in smaller groups. I hand them my arrangement and unless there is a question, they just play through the chart. Musicians are so wonderful. They don’t need to study before a performance or recording. They can really nail it the first time.

MP-D: What are your plans in 2021 as we move beyond Covid and venues start to open up?

CL:  A really big show with the big band was scheduled at “ShapeShifter” Lab in Brooklyn this past June and that could still happen. I want people to hear what I have been working on. I’m also working on a live show at “54” with some really wonderful Broadway performers and maybe more experimenting, working in the  same style but a different method.