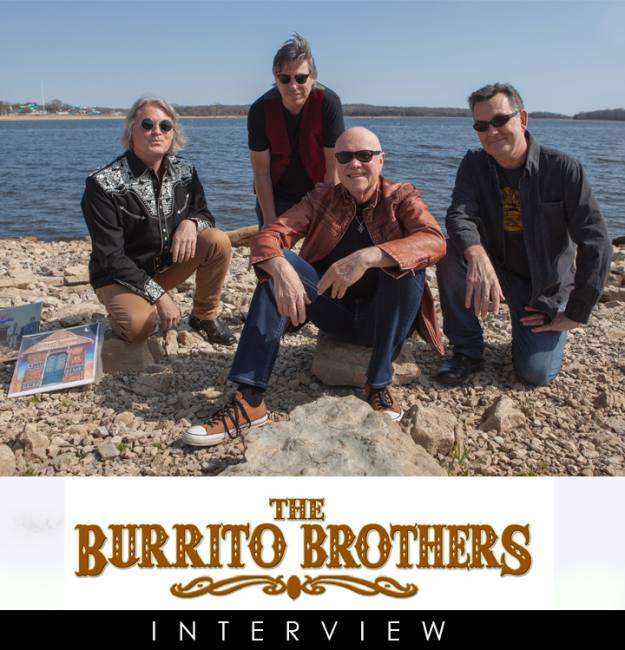 I was an avid fan of The Flying Burrito Brothers, a spinoff of the Byrds, and saw them perform the “Golden Years” in 1969-1971, when they opened for the Byrds. The original Flying Burrito Brothers featured Chris Hillman (bass, vocals and guitar, 1968-1971); Gram Parsons (guitar, piano, vocals, 1968-1970)) and Sneaky Pete Kleinow (pedal steel guitar, on an off from 1968-1997). I coveted their vinyls, “The Flying Burrito Brothers, Gilded Palace of Sin” and “Burrito Deluxe”.  I walked around singing “Devil in Disguise”, “Colorado”, “Why Are You Crying” and of course, their signature song, the iconic “Wild Horses”. Written by Mick Jagger and Keith Richard, (friends of Gram Parsons), it was released in 1970 on “Burrito Deluxe” and re-released again on “Hot Burritos-An Anthology”. Chris Hillman eventually left the group in 1971; Gram Parsons  left as well and passed away in 1973,  allegedly of a drug overdose. The remaining group, in one form or another, with numerous changes in personnel, weathered the 80’s, 90’s and millennium in various re-incarnations of country and bluegrass music.

Interview by Maria Passannante-Derr. Photo courtesy of The Burrito Brothers.

Maria Passannante-Derr: Please give our readers some background of a group that famously started fifty years ago.

Chris P. James: The Flying Burrito Brothers was a spinoff of the Byrds. At one point, people ironically said that there were more Byrds in The Flying Burrito Brothers than in the Byrds: Chris Hillman (bass); Michael Clarke, (drummer) and of course, Gram Parsons (guitar, piano) were all former members of the Byrds.“The Gilded Palace of Sin”, their first album, released in 1969 was the template for everything that came after. It has been a never ending revolving door of re-invention. The history is that there have been numerous group and personnel changes. Only Chris Hillman, from the original group, is still alive.

MP-D: Currently, what is the sound of the Burrito Brothers ?

CPJ: The Burrito Brothers has always been a rock group; but, concurrently, with this cd, I consider the sound progressive-rock-with-a-country-flavor rock that incorporates country with different instruments like the pedal steel guitar. Pedal Steel guitar is traditionally found in country groups, but once fifty years ago, in that “Golden Age”, musicians like Sneaky Pete Kleinow brought a new rock oriented pedal steel to the sound. He simply did not play old school licks. Gram called it “cosmic American music”.

The group lineup has been more constant now than in a long time. We have been, essentially, the same group of guys for the past decade; but, there is no true Flying Burrito Brothers. I have been in the band and band leader since 2009. I play keys and lead vocals. At live performances, I often play guitar to be out front rather than behind a piano and a little harmonica as well.  All three other guys in The Burrito Brothers are excellent, creative musicians who are in demand for sessions in Nashville and live music. Peter Young, our drummer took a temporary sabbatical because he had a number of projects. However, he seamlessly rejoined the group and was the engineer on “The Notorious Burrito Brothers”.

CPJ: It has been seven years since our last album and, frankly, it took too long to make. About one year ago, in 2019, I proposed that we make a 50th anniversary album to mark the release of “Gilded Palace” in 1969.  All of us are like minded musicians who write and perform well together.  It is the most stable line up to date. We started the project in May 2019 and finished November 2019. It took only a few months to get everything together.

MP-D: Please explain the Gram Parson’s influence that continues to the present in your albums.

CPJ: Everytime we come out with a Burrito Brothers album, we intend to include a Gram Parsons influenced song, usually a song fragment from the famous Gram Parsons notebook,  together with our original music. None of the songs on the new cd are from “Gilded Palace of Sin” with the exception of two songs. There is a teaser on our cd called “Do Right Man” written by Ronnie Guilbeau, Rick Lonow and myself. We are a three man writing team. Ronnie, as well as his father, Gib Guilbeau, are Burrito Brothers alumni; and, he, Ronnie, is the only guest on “The Notorious Burrito Brothers”. It is nice to have a guest lead singer. It was Ronnie’s idea to write “Do Right Man” as an answer to “Do Right Woman” which appeared on “Gilded Palace of Sin”.

“Dark End of the Street” was a track on “Gilded Palace”. When band member, Tony Paoletta, proposed to include “Dark End of the Street”, I did not initially agree primarily because we have plenty of our own original material and ideas. I change my mind after Tony heard Dan Penn, the original songwriter, sing it. He realized that not only had Gram gotten some of the words wrong but he missed what he felt were some very important nuances; and, consequently it did not tell the entire story.  Tony put forth the idea that we record what he though was a more authentic version of “Dark End of the Street”. It is wildly incorrect to perceive that “Dark End” is a cover from “Gilded Palace of Sin”. It was originally a classic R & B tune by James Carr and also recorded by Aretha Franklin. The version sung by Gram was a cover in the first place. I concluded that Gram was a fan of the song and when he recorded it, he did not even look up the words. Tony asked the group “Why don’t we do it right?”; and, as it turns out, this is a stronger, more complex version.

CPJ: None, there is no one particular song. I am happy with the work as an artistic piece, in total.

MP-D: Then, let’s discuss the album and the songs in more detail.

CPJ: The first track is “Bring It”. This is the overture, a high energy introduction to pace and program the album … where the listener is invited into the experience.

MP-D: What about “Sometimes You Just Can’t Win”?

CPJ: It is important to The Burrito Brothers that there is a reference to Gram Parsons in every album as he was the mentor and source of the group. This is an original song inspired by what we thought was an original song fragment from Gram Parsons’ notebook. There was a cd project in 2000, “The Gram Parsons Notebook” featuring musicians in Nashville, who wrote new complete songs from Gram Parsons’ lyrics in his notebooks. I wrote ”Sometimes” back then but it did not make the cut because the project grew to such large proportions. Since then, we discovered that it is not a Gram Parsons’ lyric but a lyric that Gram Parsons paraphrased from Fred Neil. The album does not eliminate the credit for Gram Parsons but adds the credit for Fred Neil. Hence, the songwriter credit is Gram Parsons, Fred Neil and The Burrito Brothers. They say that “when more than two writers come up with a song, one is just a lucky guy in the room. Gram Parsons was “in the room”; but, without Gram, it would have never been recorded.

MP-D: “Love is a River” is a beautifully sung, melodic song.

CPJ: It is a collaboration of all four members of the group. Originally, it was recorded more than twenty years ago. It was not included on the album I was working on at the time but it has remained in my heart for twenty years. This is a very different “progressive rock” piece from song ideas and fragments that Bob Hatter and I came up years ago and is now paired with Tony Paoletta’s inventive instrumental motifs. It is the cornerstone of the album. This musical blending is not done by country groups anymore which is why we are a “progressive rock” group. It conveys many things about love: love is blind; all you need is love; love conquers all; love is more important than hate; how special is love; love is a river that flows through us all.

CPJ: An acrostic is a word puzzle where the first letter of each line, read vertically, will form a message. I wrote “Acrostic” at the time of my mother’s recent passing which had an influence on the lyrics I chose. This song is about motherly advice and wisdom. At the same time, it is a highly poetic song that expects the listener to dig deeper and decipher the message.

CPJ: It was written by me and Carlton Moody, another alumni/leader from Burrito Deluxe. It is a bluegrass number where Tony Paoletta plays “old school” mandolin. It is important to The Burrito Brothers that we never leave behind our roots. It is also a transition within the album, an emotional cleansing of the palette.

CPJ: The last two tracks, “Hearts Desire” and “Wheels of Fire” are the grand finale conveying a message of positivity and moving forward.

Bob and I revisited and polished a Skip Spence (Jefferson Airplane and Moby Grape) song fragment from a bootleg concert cd of Moby that I found charming and interesting, “you are my hearts desire”. Once again, like Gram Parsons, we are writing with a talented guy outside The Burrito Brothers long gone from an era that we do not want to see fade away. The audience we want to reach will know Gram Parsons and Skip Spence.

CPJ: With “Wheels of Fire”, we are back in full gear. There are many songs about wheels and the song is full of references to classic greats in music history: Cream’s classic album, Wheels of Fire; songs by The Byrds and The Band; “Wings of Fire” is Mahavishnu Orchestra; “Walk the Golden Shire”, Tolkien; “Wheels” from “Gilded Palace of Sin”.  The wheel is a metaphor for many things, life moving on, innovation, i.e.  reinventing the wheel; wheels within wheels; the continuum of life; a message of hope; new beginnings. We want the audience to be open to provocative lines that can be interpreted in a different way.

MP-D: What do you say to the people who refer to you as a tribute band?

CPJ: We were asked to perform “Gilded Palace of Sin” in Nashville in its entirely. While it was a great musical event where prior alumni joined for a song or two, it is a mistake to bill us as a tribute band. We are so much more than that. Tribute bands do not continually create original music with each album. Every album that we have produced has acknowledged the musical spirit of Gram Parsons. The group has evolved from day one. See our timeline on our website; www.burritobrothers.net. We are trying to find a way to keep Gram Parsons influence alive in The Burrito Brothers. Each of the three albums I was involved in had a Gram Parsons tune that was never released before. By far, this is the best album we have ever produced.  It is very strong and I am proud of it.

When we perform, of course we play the favorites, “Wild Horses” and other “Golden Age” songs and the ones that we like, for one-half of the program and then we play our original songs, inspired by The Flying Burrito Brothers  and Gram Parsons, on the other one half of the program. Beyond Gram Parsons, there is an ethic that we don’t want to be forgotten, more than The Byrds, The Band, Steve Stills, Buffalo Springfield or other groups of that era of just simply gorgeous music.

Visit our website, www.burritobrothers.net for the history of The Burrito Brothers and check out the conceptual video of  “Acrostic”. We look forward to resuming touring and performing “The Notorious Burrito Brothers” for our fans.