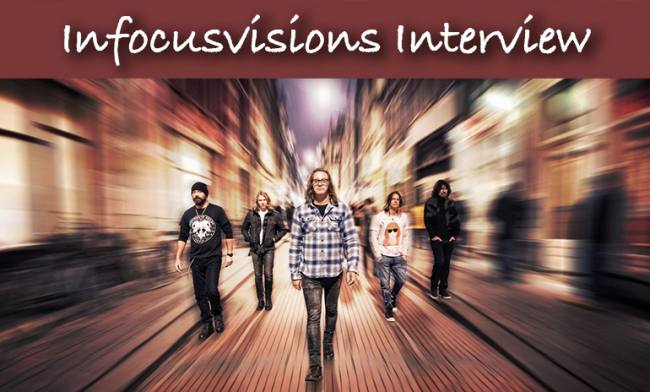 I recently had a chance to talk to Kevin Martin, lead singer of Candlebox. Martin was surprisingly open, exuding confidence and humility with a comfortable easiness. He was also very funny. I was most surprised to learn that he is a reluctant lead singer and is embarrassed to sing in front of people acoustically. It was a pleasure to speak with him and I’m looking forward to seeing Candlebox perform!

Fredda Gordon: You are approaching a big birthday, Happy Birthday a little in advance. What will you do to celebrate?

Kevin Martin: I’m having a party this summer. April is a hard month to have a party with all your friends so we decided to do it Memorial Day weekend here in Palm Springs [LA]. I’ve invited 50 of my closest 50-year-old friends. I can’t believe that I’ve reached this age. It’s shocking to me. But, thank God I’m here and I’m healthy. I got that going for me [laughter], that’s about it.

FG: How did it feel different playing with the Gracious Few vs. Candlebox?

KM: Well the Gracious Few is a labor of love and an absolute joy. It came up at a time when I think both bands needed something different in their lives. The guys in Live obviously were dealing with their relationship with Ed, and being unhappy where the band was, and with the records they made. Candlebox was in a very stalled free-fall from a label deal that went really bad from 2008 to 2012. I think we both needed an intravenous injection of rock and roll. It happened very fast, we made a great record and I loved every minute of it. I would love to do it again with those guys as well. Such a joy.

But, it’s the same now with the guys in Candlebox. With Brian [Quinn], Island [Styles], Adam [Kury], Dave [Krusen] and myself, it’s the same kind of energy and it’s really new and fresh to us, even with Disappearing in Airports. It’s almost 3 years old, and we still listen to the record on the bus. We pull up songs [and say] ‘Hey, you want to play this one tonight?’ and then we end up listening to the record. Which is odd to me ’cause I never listened to a Candlebox record before. Would make it, be done with it, and then walk away. If it was Candlebox 2008 I’d say that Gracious Few was way more fun, but I think Candlebox 2019 is such an honest-to-god joy, and a pleasure to play with these guys. I can’t imagine playing with anybody else.

FG: Is there something you would like to do musically?

KM: Well, I started as a drummer and I would much rather be a drummer. I’m still the reluctant lead singer of Candlebox 27 years later. And, piano. I never learned to play piano and I’m kicking myself every single day and I still haven’t bothered to pick one up and learn. I guess I’m not as devoted to my craft as I should be, maybe. I started out with french horn when I was a kid, and then I moved to clarinet and and picked up drums when I was 10. That was my real love, so that’s what I’d rather be doing.

Somebody sent me some songs the other day from the early Candlebox, which was called Uncle Duke. I was asked to sing on some demos and I’d never sung in a band before. I was listening to these and I was like ‘oh, my god, I’m the worst fucking singer ever.’ Its ridiculous, how did this even turn into what it is? I had sung in choir but I never sung in a band, so I just had to kind of figure out ‘well its just music, and this is what it is, and I guess I’ll be a lead singer.’ I’d still much rather be a drummer.

FG: Are there any musicians who, if you played in front of them would make you nervous? Or, that inspired you to that level?

KM: I’ve played in front of some pretty talented musicians. Oh, god, Rush! The guys in Rush. Living Colour, Corey, Vernon and those cats. When they took us out in ’93. Metallica. If I had to pick somebody that was of a major influence and inspiration to me, singing in front of Robert Plant or Otis Redding would have probably put me over the edge. Just because Otis is, my favorite singer of all time and then Robert Plant has been such a huge influence and inspiration to me, so I’d probably be pretty nervous. I say this in the sense that I step out onstage and I can play these songs and be the singer for Candelbox, but you won’t catch me sitting around my house playing an acoustic guitar in front of anybody. I can’t do that. I’m way too nervous.

FG: Can you tell us about the name Jasper tattooed on your arm?

KM: That’s my son. I got that when he was born. He just turned 11 in January and he’s making me crazy cause he thinks he’s fucking 16. Oh, God, it’s so irritating.

FG: Do you do anything before your shows to pump you up for your dynamic on-stage energy?

KM: I hear the audience. I don’t do warm ups, I treat my voice very poorly. I treat it like it owes me money. I drink far too much. I used to smoke, I don’t smoke anymore. I think it’s just being around the guys. Like I said earlier, I love playing with Brian, Island, Adam and Dave so much. When I’m around them, I’m just ready to play the show. They just inspire me. I know that I can count on them. And, even if we fuck up a show, or a song during the show, I know that the recovery is going to be so seamless that no one is going to know except us. And, if anybody stops the show it’s going to be me because I ended up fucking up a verse or a part of a song lyrically, which I’ve done. I’ve been known to do that during a show. I won’t leave it on the band’s shoulders, that’s my responsibility. I know I can count on these guys and that’s what excites me.

FG: What was your first meaningful musical experience?

KM: Probably my first concert. Black Flag, Dead Kennedys, Butthole Surfers in San Antonio Texas when I was 12 years old. That was life changing for me. Seeing Black Flag, Henry Rollins, punk rock music, that was just mind blowing to me. I was just about to turn 13 and that was my first concert, so I just freaked out. I was like this is the greatest thing ever. And then I was fortunate enough to tour with Henry Rollins in ’94 and tell him the story about that show.

FG: Was there music around your house when you were a kid? What kind?

KM: All the time. Both my parents were musicians and my entire family is musical. There still is. You come to my house and music’s on. It could be Hall and Oats; It could be Boz Scaggs; It could be Led Zeppelin; It could be The Clash. Jeez, all day yesterday I was driving around listening to Amyl and the Sniffers. A punk band. I’m obsessed with this band. It’s not the kind of music you would drive around listening to but I’m weird that way. I have such eclectic musical taste. I’m all over the place.

FG: Are there any musicians that are trying to make it that you encourage?

KM: Yeah, there’s a band from Detroit, The Lows, and this kid Angelo Cappolla. Yeah, he’s a star. I’m just like, ‘keep doing what you’re doing. Don’t change. Just be who you are and keep playing and be an inspiration. Not only to yourself but to other kids that are 21 years old trying to do this.’

FG: Is that your twitter feed, the one with the 1950’s show with a man who happens to be named Trump happens to be building a wall? What do you think about the current climate?

KM: It’s ok to disagree. It’s ok to have different opinions of government, whether you like Donald Trump or not. That’s ok. It’s not ok to be as divisive as he is and to be as insulting as he is to this position he holds, which he should respect more. It’s not the way that government is supposed to be run. Don’t even get me started, I’ll go on for hours. I think that people need to realize that this is not the way this country was founded, and it’s not the way this country is supposed to be run.

We’ve never been as divisive as a country as we are right now. Maybe the last time was during the civil war and that’s honestly how I feel. The amount of hatred that we’re seeing on a daily basis is unacceptable. Like I said, its ok to disagree, its ok to not have the same opinion, but its not ok to hate somebody because you think he’s got a pencil-neck and you want to tell everybody that’s in your rally that you think he’s, you know, a jerk. That’s not what the president of the United States does.

Imagine if bands talked about other bands this way. Fans would be furious, It’s because you’re attacking someone’s emotional connection. Politics of this entire country is founded on emotions and empathy and sympathy. We’re a country of immigrants. All of us. My great grandmother came over from Ireland. My dad was born in 1922 to an Irish woman in Chicago. I’m Irish. I am not a Native American. This is not my fucking land. I want people to respect one another. That’s the way it is. But then I do stupid shit like post a thing about a con man like Trump from a TV show in the ‘50s. I guess I’m part of the problem.

FG: Are you active with social media and do your own posting?

KM: Yes, unless it’s concert dates and stuff. That’s generally management because I don’t have time to put the flyers together and shit. They run everything by me. I approve all of them. If you write to the page whether its Instagram, Twitter or Facebook, the answer you’re getting is coming from my mouth, or my fingers, not a management team.

FG: If there was one thing you could differently, what would it be?

KM: Back in 1995 this band made a decision that was detrimental to our career. I would have definitely listened to my manager at the time, and done what he said we should do. You do stupid things based on loyalty, and unfortunately it ended up costing us an enormous career in Europe because we didn’t do it. And I would definitely do that differently.

Candlebox, mainstays of the grunge movement, will turn the clocks back to their mid-’90s debut to celebrate the album’s 25th anniversary – at the historic Wellmont Theater in Montclair, N.J. Candlebox is including all tracks off their debut on their latest tour, reminding audiences how their loud-soft dynamics, tight guitar sounds and distinct lyrics made them one of the most important groups of the past 30 years.

Their hits, including “You,” “Far Behind” and “Cover Me,” trace back to this album, which sold more than four million copies and landed at No. 7 on the Billboard 200. Candlebox’s gritty, even bluesy sound challenged the “authentic” grunge quality, but helped refine it for mainstream audiences, alongside bands like Collective Soul, Bush and Live.