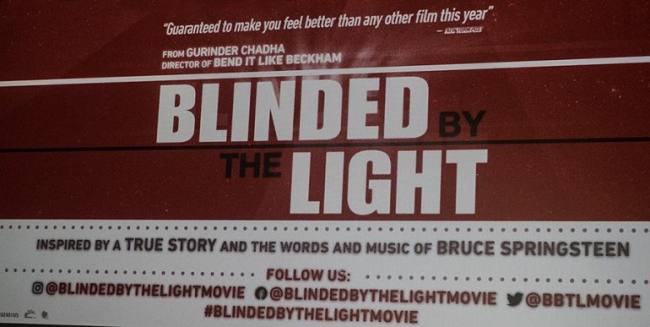 I saw an absolutely wonderful movie as part of the New York Indian Film Festival. “Blinded By The Light” by Director Gurinder Chadha tells the story of a Javed, a 16 year old Pakistani boy in England who hates where he lives, doesn’t want to do what his family wants him to do and has a dream to be a writer. Based on a true story by lead writer Safraz Manzoor based on his memoir,”Greetings from Bury Park” and it tells his story about how he discovers Bruce Springsteen and his whole world opens up. He even says “it’s like Bruce knows everything I’ve ever felt, everything I’ve ever wanted.”

How many of us have felt and said the same thing?

At 16, when I first discovered Bruce Springsteen…thanks to a teacher-John Heyn, who is now a friend, my life changed…just like the character Javed in the movie…and the COUNTLESS others I know who love this man’s music and say the same thing. He even had a teacher who made a difference at age 16…just like me.

When I first heard of the movie, I admit I rolled my eyes thinking it was going to be cheesy and dumb. I was very wrong. I REALLY loved this move. I even teared up a time, or 12.

This movie will touch you–even if by some chance you don’t like Bruce Springsteen. Anyone at any age who has had a dream can relate to what Javed is going thru.

BUT-make sure to see it in a movie theater-the sound at the Village Cinemas in NYC was just terrific.

It opens everywhere on August 14.