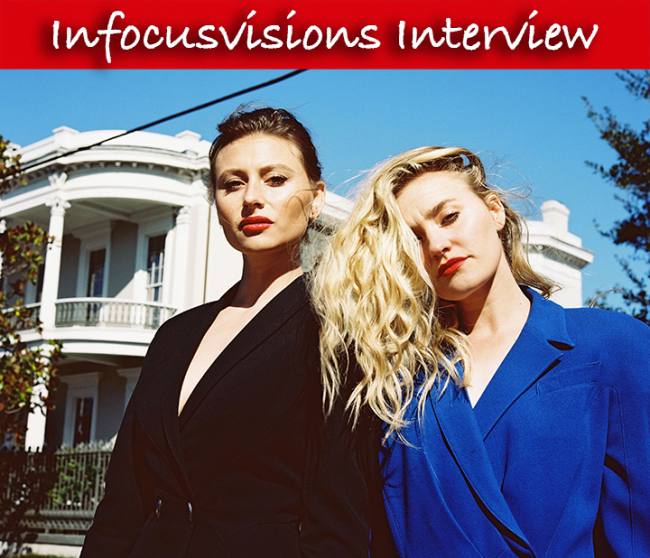 I had the pleasure of speaking with Aly & AJ Michalka, of the sister pop duo, Aly & AJ. They rose to fame as singers and actors as part of the Disney Channel franchise over 15 years ago. Since then, their careers have evolved far beyond Disney, with Aly a fan favorite on the CW hit iZombie, and AJ a regular on ABC’s The Goldbergs and its spinoff, Schooled. Their passion and dedication to their craft quickly became clear in our conversation, as they spoke about juggling their busy acting schedules while simultaneously releasing new music. We caught up as they kicked off a new tour around this US, their biggest tour in 10 years.

Aly & Aj Michalka: We did, we just kicked it off! Our first show was at the University of Illinois.

AM: What are you most looking forward to about being back on the road?

AJ : We’re just excited to meet the fans. To be honest, one of our favorite parts about sharing this new music is having meet and greets every night. We get to experience reconnecting with fans that we haven’t seen in 10 years, meeting new fans who have just been introduced to our music, hearing their stories and the ways they connect with our songs. It’s really a cool way to see your music all the way through, from the creating stage, to releasing it, to now playing it live. And to be honest I’m really excited about playing these new songs live. We have a new EP coming out on May 10th. Each song has never been heard before and the fact we can kinda introduce them in a live setting is really exciting. Last night was such a thrill. We played a college town in Illinois, and the response was incredible. I’m excited to play for the next two months. Aly and I have not been on the road this long in awhile, and I’m excited to be back out there.

AM: Tell me about your new music.

Aly: This new music, we really started writing about a year and a half ago. We weren’t  necessarily looking to put out just a five-song EP, I think ultimately we wanted to put out a full record but our schedules hindered that only because AJ works on a show eight months out of the year and I work on a show that was shooting in Vancouver so it made it difficult for us to be able to be in the studio at the same time.

Basically we felt like we were lucky enough to even get these five songs out into the world and mastered in time. We literally just closed weeks ago. A lot of the inspiration on this album was different than the Ten Years release. That was very relationship-based EP where this one isn’t nearly as much of one. It’s a little more self-reflective. And we felt that the fans would really love having songs that felt very personal to what we know many of them are going through and moments that we’re going through as well as adults.

AM: You both have extensive experience in music and film, how has music influenced your acting, and vice versa?

AJ: The cool thing about being able to professionally pursue both, is that they really can intertwine with each other. I am now on a show on ABC when I play a young woman who goes back to her old high school to become a music teacher. So I’m able to blend my voice and my guitar playing to all these young students in my classroom. And that’s a really interesting art form that not every actor would necessarily be able to easily dive into had they not had experience in music, so I do think the two pair hand-in-hand very nicely.

AM: How has being women in the entertainment industry evolved over the last 15 years?

AJ: It’s been incredible. Starting as young as we did, there have definitely been some ups and downs, power struggles specifically, just trying to really make our stake in the music industry and stand up for what we believe in, and create material that we believe is true to ourselves and true to our fans, without being kinda stomped on by a greater power in the industry. But I think we’ve been able to accomplish that, and stay positive and not have a bitter attitude towards it, and I think that’s really important. In this industry, you can be easily bullied and shuffled around, and I think Aly and I have really held ground the last 15 years, really turned into mature business women, to be honest. I think Aly and I have learned a ton, and have been able to, by learning a ton, shed light on our business.

AM: Yes, and positive role models as well

AJ: Thank you so much!

AM: Working with a sibling is unique in this industry, did you guys ever get jealous or fight, being so close in age? Did you ever struggle working together? Why do you work so well together?

AJ: We just tend to really fit well. We have a lot of the same tastes. We share very similar opinions. We have the same loves for music, for acting, and for the arts. And there’s only two of us. We’re two years apart, we grew up in this business together and we live and breathe it together. I love what Aly brings to our band, she loves what I bring to our band, and there’s not really anything like our dynamic duo power that we have. I think it’s really special and I’m excited that we get to work together.

AM: You’ve both had a steady career in TV shows and music, how do you prioritize what you work on?

AJ: Yeah, it’s not easy. When you’re working on a television show but you also want to release new music, it’s hard to line up the two, especially when you’re both on different shows, and one might be in Vancouver shooting, and one’s in LA. But there are two of us, and you can make it happen. And Aly helped spearhead this last EP while I was kinda in the weeds on this new show I’m on for ABC. And when I have days off, I come in the studio. You really just make it happen and prioritize.

Aly: When we have a contractual obligation, like AJ being on her show or when we’re out on tour, that is the main focus and we’re not going to let anything else derail that. But at the same time, we can still be working on the other projects that isn’t maybe at that moment being focused on but can still be worked on in some way, while focusing on the job we do have at hand.

AM: Was your transition out of Disney a natural/organic change, or was there some intention behind it?

Aly: It was pretty organic, I think mostly because we grew out of the channel, being that by the time that I was off Phil of the Future, we were basically 17 and 15 years old. We had music that was still on the channel for another couple years, but really by the time we were 20 and 18, that was kind of the end of our time over there, just in terms of age. I think AJ and I were ready to move onto something new. So it worked out really well.

AM: Your sound has been compared to Haim or described as having a 80s synth pop sound. Who are you most influenced by musically?

Aly: There isn’t really one specific artist that we gravitate towards. I think we’re obviously flattered to be associated with great acts that we look up to. At the same time, we went out to make this EP, collection of five songs, we didn’t flip to a specific artist with the hopes of trying to recreate that before, so we just happened to look to a lot of 80s pop. And not really like the 80s glitter pop, that I think is different 80s that we just don’t connect with. We connect more with the Peter Gabriel-type of 80s synth pop. We definitely felt like we were making music that was elevating us from the last EP and it definitely felt different enough, but it’s still staying in that same world, which I think we’re really happy in, I think it comes really naturally to us and the style we’ve been writing. AJ and I are influenced by many different types of music. But at the end of the day, I think it feels like the best fit for us, and we’ll continue to write melodies that really flourish in this type of environment.

AM: What do each of you tend to gravitate to when creating music? Is it the lyrics? Is it the music? Etc. etc.

Aly: I think for us it’s always melody first.

AJ: Yeah, I think melody kinda grounds where the song is gonna go and then from there the lyrics really take off. The instrumentation is obviously super important, usually we start with a  great electronic synth line that inspires maybe a chorus idea, then from there it’s kinda like lift off. There’s no format to it, there’s no rules, it’s just like, I might get an idea and start singing it, and Aly hopes in with a lyric and then next thing we know we’re like “Ok this is what the song’s about” It’s usually a one-two day process per song.

AJ: Yeah, we’re quick writers, we’re quick movers, we’ve been doing this for a long time, and we kinda know when something works and when it doesn’t and when to say goodbye to something and when to hold onto something. We don’t ever put a sort of timeline on it.  We just try to create as much as we can. But usually a song is wrapped up in a day or two.

AM: What is something that both of you geek out on? That people may not guess about you?

Aly: We’re obsessed with Game of Thrones. We’ve seen every episode, we’re thinking of restarting the entire thing from the beginning.

AJ: We kinda want to start it when we’re out on the road and we can watch it on our phones.

Siblings and gifted duo Aly & AJ are returning to the stage to rock concert venues nationwide this year. In a departure from their previous commercial pop sound, Aly & AJ have returned to form with their successful EP, streamed nearly 10M times. Their breathy vocals and experiment with wistful synths make them a force to be reckoned with as they power through tracks like “The Distance,” “I Know” and “Take Me.” Critics have praised the EP and its 1980s-inspired music and production. “Ten Years” peaked at no. 25 on the U.S. Independent Albums chart and it’s ushered them to the next wave of success – which finds them dropping more new music (including 2019’s “Church”).